I am trusting that this post meets us all in the best of eeman (faith). ihsan (perfection) and 'aafiyah (sound health). May Allah keep our feet firm on His path and grant us safety in this life and the next...Aameen.

These days, I barely have some 'me' time as I am busy with other things and you can only imagine how the days speed by without us even having concrete knowledge of what we have been doing. Such is the affairs of this life as it is fleeting and yet, we fail to acknowledge this in our own existence.

I have been on an islamic posts and pictures overdrive and I call myself a collector and I only hope I am able to do dawah through this medium.

Over the weekend, I was doing some search online and I came across this video:

Shortly before I stumbled upon this video, I just got out from an argument with le husband because someone had eaten the food I wanted to bring to work today and I was totally worked up because of this, Subhanallah!

After watching and rewatching  I dragged the people around me to watch with me and I got all teared up. Why? Because I have not trusted Allah enough to be my sole provider. I keep relying on people to do this and that for me and I do not even get to appreciate them enough. I was busy squabbling over a bowl of food when I did not even know if Allah was going to provide me with life the following day.  I was sulking up when I did not even know if Allah will provide me with sound health to eat the food....Subhanallah!

This to me is the life of an ingrate, the one who does not rely upon his Lord and keeps his hope in things that do not benefit him.

May Allah make us grateful servants and may He bestow us with the grace to keep our reliance on Him for the bountiful provisions He has put for us in this world...Aameen.

Allah gives and forgives;
Man gets and forgets;
Be grateful; Be careful!

Till next time...In shaa' Allah 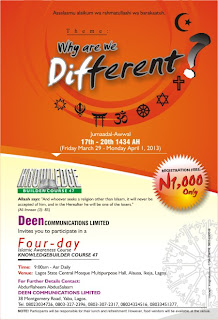 THEME: WHY ARE WE DIFFERENT?
DATE: Jumaadal-Awwal 17th – 20th 1434 AH (Friday March 29 – Monday April 1, 2013)
TIME: 9.00am – Asr Daily
VENUE: Lagos State Central Mosque Multipurpose Hall, Alausa, Ikeja, Lagos.
Allaah says: “And whoever seeks a religion other than Islaam, it will never be accepted of him, and in the Hereafter he will be one of the losers.” (Aali Imraan [3]: 85)
REGISTRATION FEES: N1000
Please contact:

Please find attached the flyer for the programme.

Kindly note that as a form of sadaaqah(charity), you can sponsor as many people as you choose. May Allah reward you abundantly as come and as you bring someone along.

Been a tad while and I apologize again and again. Up and Running doing so many things at a time...its called multitasking but who am I fooling anyway....definately not you!!!

Anyhoo, my #HomeGurl Wuraola sent me this dua on a bright afternoon and I have been hooked on it since then. It calms me when I am tensed and yes, I can't categorically say I know the full meaning but my lil' arabbiyyah helps me out in some instances. Therefore, I will like to share it with you and maybe we can come up with the transliteration and meaning in the comments section for those who are interested. Till then, in shaa' Allah.

For my friends on the divide, I leave you with this to torment your taste buds. 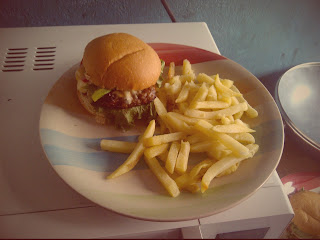 Posted by ArabianPrincess at 00:48 No comments:

So much water has passed since my last post. Kindly bear with me as my plate is full at the moment. Something interesting happened to me during the weekend and I want to share it with you all.

On Friday, 8 February 2013 at 11.07am, my phone buzzed and I realised that I had a whatsapp message from a random number. Like everyone else would be, I was curious to know who it was and I went on with the chatting flow. After series of messages, I had to eat the humble pie and asked the person who he/she was and I found out it was a sister I met a long time ago who happens to live in the new hood I recently fully moved into.

We talked about a few random things and I besieged her with my problems of how I need/needed a good/reliable hair stylist around the area that I could trust or welcome into my home. She put me out of my misery by telling me she had someone who takes care of that for her but we had to visit her shop.

Fast forward to Saturday, I met with her for a 12pm appointment and we headed to the salon. The owner was welcoming and full of life but had a nosy customer ( who I have tagged Salon Landlady) who happened to be making braids abi na feathers dem dey call am. After settling in, we all told the lady what we wanted to do and how we wanted it done. Then Salon Landlady for one reason or the other decided to fester her eyes on us and was recording our speeches and movement and then because she thought we were Hausa started talking about us with loud tones in Yoruba not knowing that 2 out of the 3 were actually yoruba-speaking.

Firstly, she talked about my friend who came with her daughter of 4 years and how she was due to have another child, she spoke about her skin colour and mentioned it to our hearing that her skin was that way because she married a rich man, she spoke about her iPhone and how it was a "screentouch, smartphone, and touchscreen' all at once (at this point, I was full of laughter that I had to quickly send my friend a bbm about what we were facing).

Next, I became her problem because I was unwilling to remove my hijab and let her tear into my body with her eyes, then she said, "se oru o mu eleyi ni' meaning "Is this one not hot" and she went on and on about her friend who never opened her hair like us and ended with some nasty jokes.

My friends left before me and then I felt victory in me because immediately they stepped out, I switched to Yoruba and asked the woman "nigba wo ni ema setan' meaning "when will you be through". Then our salon landlady looked at me and said 'se yoruba niyin ni?' meaning 'are you a yoruba girl?' I answered in the affirmative and I let her know that I heard and understood all she has been saying and suddenly she became quiet till I left.

My question here is why do people feel they have the right to talk about, analyse and dissect other people's lives simply because their is a language barrier?

P:S: My grammar may seem incoherent or there may be few typos, please forgive me and move along!

Alhamdulillah, I had the nerve to type here. I had signed up since yonks but laziness has not allowed me to do a proper intro/post. Anyhoo,I am here now and zatalldatmarras.

This blog is meant to be about me and me alone (puh'leaze deal with that) and the special people in my life (you won't be seeing pictures of them though), my faith, work and very many uber random posts about uber random things, events, places, anything and lastly FOOD, yes FOOD!!! 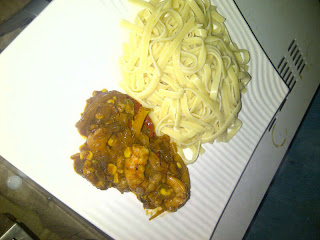 For the sake of 'You' that do not know me, I am muslim and I will be bloggin' a lot about my faith and how it tames/has tamed me (I am not that wild) and gives me freedom which others do not see cuz I am wrapped up in their judgemental eyes.

And yes, this is the journey and it has started. Take a seat and enjoy the ride.